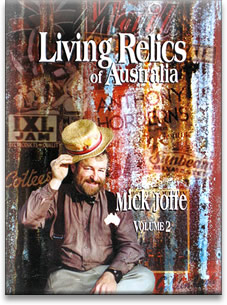 I think I was born in 1926, in Thargominda, QLD. Dad was a roo shooter, a long time round Hughenden. I never had any education. Never had the chance to go to school but I’ve been breaking horses in ever since I was about 6. Mum went droving for Sidney Kidman for years. Dad knew him well. People used to say “Gee your baby’s fat Harry!” He’d say, “Yeah, it’s Sydney Kidman’s beef they’re eating. My parents were droving when I was born and I nearly died with a twisted bowel when I was 6 months old and I was on the road…born into the droving….sister Mavis born in the bush. Well, Dad and Mum was drovin’ all the time….with us 4 little ones…and when not droving we did roo shooting…

When I was about 14, I can remember being on a droving trip from Wave Hill Station in the Tanami desert of the NT to Morestone Station north of Camooweal in Qld. ..took us 3-4 months. We drove from Tanami for 5-6 years. ..might pick up a mob of fats and take ‘em to Dajarra railhead. Well I suppose it was a hard life but it didn’t worry us kids….but we’d curse and swear when we had to get up outa bed for a 2 ½ hour watch. We used to curse ol’ Dad and his stinkin’ ol’ drovin’. …but we’d soon be whistling and singing. It was a good life cos the family was together most of the time. We played the mouth organ. We had a bit o’ music in us. Hard work never killed us only the thing I cursed a few times was having no education. …but you pick up bits and pieces and battle along and take it in ya stride. When ya kids ya don’t miss it, but I got through life without it. But we were good trackers. Me and sister Kathy, we could track a mob of’ goats over the hills. We had to do all our own leatherwork, shoe our own horse, break’em in, counterlined our own packs and saddles, made our own hobbles and bridles. We fashioned our own shoes to fit our horses. As the saying goes, ya don’t shape the foot to fit the shoe, ya shape the shoe to fit the foot. Well I learnt to cook damper first, then bread, then rolly pollies, sweets, Johnny cakes, brownies. I set me own hop yeast, killed my own bullocks, and corned it with coarse salt in Winter, I’d carry fresh meet for up to a fortnight. At night spread it on bushes to cool off then bug it again in the morning before ya took off. The bullocks would muddy me water and the yellowbelly would come up and we’d leap off the horse and onto the bank. The sway cover was a bit of calico canvas, no mattress, slept on the swag cover on the ground. We’d put a few branches down on the ground in winter. Mum and Dad never complained about their bones. Used to get a bit of bee honey. We had 13 horse packs. One was the meat pack. Other was the sugar pack. Then the flour pack. One for sauces and dried fruit and we had the shoein’ pack for all the shoein’ gear. Clothes went in the swags and just one hat and the one pair o’ shoes on ya. Couldn’t collect rubbish like the Joffes. No fossils Mick, no museum pieces. We didn’t have room t’ carry the buggers. Possessions didn’t mean much to us,. All we wanted were our horses. We had 8 or 10 night horses. Ya had to ride them round the cattle all night. Round and round the mob and if the rush, ya gotta have a good ‘orse under ya. And then you had big heavy buggers for a pack horse. Then ya had ya day horses. Everyone had about 4 or 5 horses each, and we used to work ‘em in turns, spellin’ ‘em. But the packhorses did it every day ï¿½ carry the packs 10 or 14 mile a day depending on the water. When I was tailer, I caught all the men’s horses and the had my breakfast. And packed up off to the next camp. …day after day…. Same ol’ routine....but you were in the swing of it.

With 2 ½ hours watch every night and up at 4 am ya didn’t feel like making games with men…In 1950 Dad got sick on me. We were in the middle of the Munjari scrub. …bad kidney and bleedng through the penis and this hawker fella came and I got him to take Dad to Newcastle Waters and that left me and the men with the 1550 bullocks and the horses. We took them from 60 mile, the other side of Halls Creek WA all the way to Dajarra, the other side of Australia. I was the boss then. I had 3 black fellas and 2 white fellas. When the postmaster at Newcastle Waters found out , they all started writing stories about me for the papers and magazines and it just kept going. It still hasn’t stopped. People have made more money writing songs and poetry about it than I have made in me life. I suppose when you think about it, it was a big thing. I wonder about it now. How I did it I know I did worry at the time but ya just had to do it. As long as the cattle and horses were watered. That’s all ya worried about. …. ya animals. I didn’t want to be written up. I’d have been just as happy left alone ï¿½ always been on the shy side. The drovers have been forgotten, almost, since the trucks came in. The kids of today I think don’t realise what poor ol’ people went through them days. No-one ever worked harder than my mother, Ruby Zigenbine, cookin’ in camp ovens over open fires. …washin’ at lonely bores…she must have gone through hell on the road with 8 kids with some in nappies.

Edna made history in 1950 when she took over from her father and drove 1550 head of cattle 2,240km across the Australia from WA to Qld… a 6 month trek in charge of 5 male drovers. After that numerous lengthy tough trips throughout the country featured in films, documentaries, magazines and poems. Edna was once the belle of the stock routes and made her niche in the Stockman’s Hall of Fame as a boss drover at 23. Hundreds of stockmen sought to meet her and court her. Douglas Lockwood wrote several articles on her as “ a tough cattle drover of the north.” Her father said, “She’s the best man I’ve got!” A great many asked for her hand in marriage and were rejected. Once when asked she said “I wouldn’t marry you, you bastard!” The film “Australia” comes possibly closest of any capturing the true atmosphere of Edna’s real life. Edna, sadly, has passed away and this sketch and interview, although done in 1993 in Mt Isa, are published for the first time.